Would you like to switch to the accessible version of this site?

Don't need the accessible version of this site?

Our Doctors and Staff 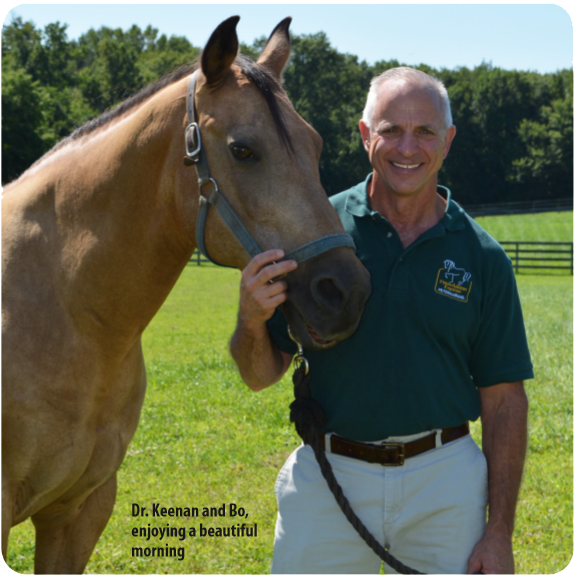 Dr. Daniel P. Keenan earned his Bachelor’s Degree from Villanova University in 1980 and his Doctoral Degree from The New York State College of Veterinary Medicine at Cornell University in 1984. Upon graduating from Veterinary School he moved to central New Jersey and began working at The Walnridge Equine Clinic where he remained until 1988. In 1988 Dr. Keenan began his own practice centered in the Bordentown area where he has remained ever since. In 2006 Dr. Keenan and Dr. Ron McAlister merged their practices to form Keenan McAlister Equine which later became Foundation Equine Wellness and Performance.

Dr. Keenan has served on many committees and boards concerning the equine industry both in New Jersey and nationally; including past memberships on the Board of Directors of the American Association of Equine Practitioners (AAEP) and the Leadership Development Committee of that organization; he has also served on the Professional Conduct and Ethics Committee and the Educational Programs Committee of the AAEP; as a past President and Treasurer of the New Jersey Association of Equine Practitioners (NJAEP); as Vice President of the NJ Horse Council; as a member of the New Jersey Board of Veterinary Examiners; as a member of the Executive Board of the New Jersey Veterinary Medical Association; as a representative to the New Jersey Agricultural Convention and on various other committees having to do with the equine industry in New Jersey.  Dr. Keenan was honored in 2018 by the AAEP for his outstanding voluntary service to the Association,  and received the 2018 Governor’s Award for New Jersey’s Horseperson of the Year.  Dr. Keenan currently sits on the New Jersey Equine Advisory Board (NJEAB) as a representative of the NJAEP.

In his spare time Dr. Keenan enjoys spending time with his wife Teresa and his son Liam, and riding his mountain bike and his road bike long distances. He is an avid participant of the Anchor House Ride, a 500 mile bike ride that takes place each summer and benefits The Anchor House, a home for runaway and abused children in Trenton, NJ. 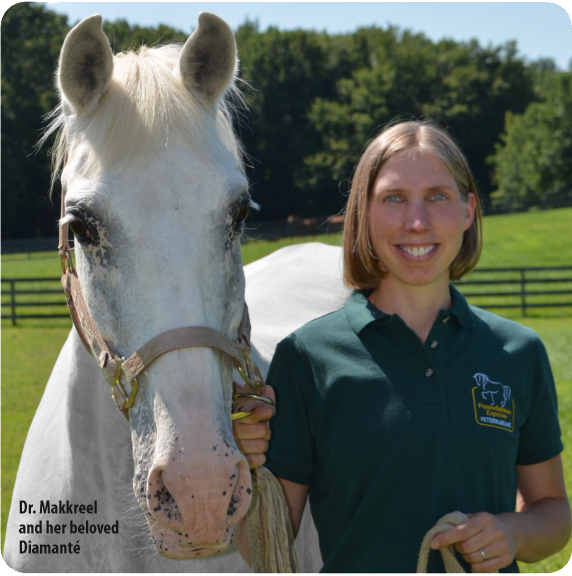 Dr. Lynsey Makkreel was born and raised in Ontario, Canada to a family that had nothing to do with animals and not a single pet. Dr. Makkreel’s first career choice was to be the queen of England, but once she realized at the age of 4 this was not going to be possible, she somehow decided that she would become a veterinarian. At the age of 6 she went to her first week at horse camp and from then on, she did everything in her ability to be around horses.

Dr. Makkreel graduated high school with every intention of going on to a career in veterinary medicine. Completing the prerequisite college courses within two years, Dr. Makkreel was admitted to the Ontario Veterinary College at the age of 20. Dr. Makkreel completed all four years of her veterinary education at the top of her class, winning numerous scholarships along the way. In her final year, she was nominated to apply for the prestigious Rhodes Scholarship.

Having decided that she would pursue a career in equine medicine, Dr. Makkreel elected to complete an equine internship at Fairfield Equine Associates in Connecticut under the tutelage of Dr. Richard Mitchell, 7 time Olympic team veterinarian. It was during this year-long internship that Dr. Makkreel gained a tremendous amount of knowledge and expertise in lameness and performance medicine. Dr. Makkreel was then offered the opportunity to spend the winter season practicing her veterinary skills on top-notch show horses at the world class show grounds in Wellington, Florida.

Dr. Makkreel is certified as an FEI Permitted Treating Veterinarian, and has completed The International Society of Equine Locomotor Pathology  (I.S.E.L.P.) certification course.

Dr. Makkreel joined Foundation Equine in 2006 as an associate veterinarian and became a partner in the practice in 2012. She quickly made New Jersey her home, and along with her wonderful husband Gerry, are enjoying their two beautiful daughters, Emily and Mia. Her family is complete with 3 horses and 2 cats.

Music has always been an important part of Dr. Makkreel’s life having taken piano and singing lessons as a child. Before leaving Canada, she was part of a professional choral ensemble. Dr. Makkreel is currently a member of the NJ Chamber Singers, a small audition only ensemble that performs 8 concerts a year. Outside of music, horses and family, Dr. Makkreel spends most of her free time gardening. 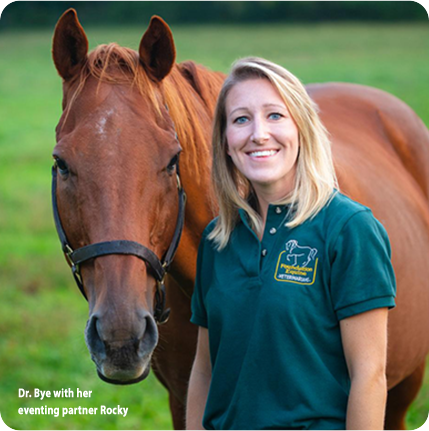 Dr. Sarah Bye grew up on a small farm in Bucks County, PA and competed in hunters, equitation and eventing with her first pony, a Connemara named Pogo. At twelve years old, she was given six feral miniature horses, several of whom she trained and successfully competed in combined driving and pleasure driving. After growing out of her pony, Dr. Bye competed in eventing with her off-the-track thoroughbred, Rocky, whom she continues to ride today.

Dr. Bye obtained a bachelor’s degree in Biology and French from Wellesley College, then received her veterinary degree from Virginia-Maryland College of Veterinary Medicine with an equine emphasis. While in vet school she participated in service trips to Peru and Nicaragua with the United States Humane Society, aiding working horses in rural communities. In her final year of school, she received the “Outstanding Senior Award” which recognize exceptional academic achievement and leadership by a graduating student. Pursuing additional training, Dr. Bye completed an internship at Unionville Equine Associates in Oxford, PA, where she gained extensive experience in ambulatory medicine, sports medicine, surgery, and emergency and critical care.

Dr. Bye is certified in equine chiropractic care, and is certified as an FEI Permitted Treating Veterinarian.

Joining Foundation Equine in 2018, Dr. Bye is thrilled to be back in the area with her dog, Cashew, and her horse, Rocky. Although Dr. Bye appreciates all aspects of equine practice, her special interests include lameness, sports medicine, and chiropractic care. Beyond work, Dr. Bye enjoys CrossFit, running and hiking with her dog, and spending time with family and friends. 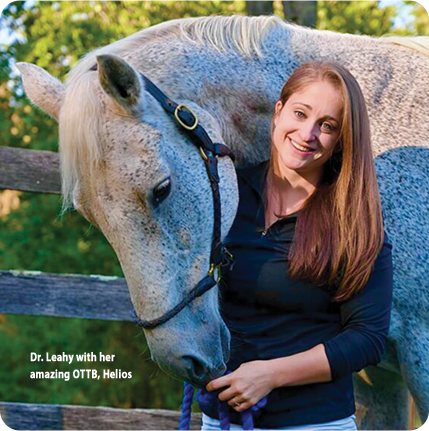 Dr. Liz Leahy grew up in East Brunswick, NJ and started taking riding lessons when she was seven years old. At the age of thirteen, she became the proud owner of a wonderful pony named Blaze with whom she competed in barrel racing and team penning. Dr. Leahy eventually added two off-the-track Thoroughbreds, Romeo and Helios, to her collection and retrained them in hunter/jumpers and eventing.

Dr. Leahy obtained her bachelor’s degree in Animal Science/Equine Science from Rutgers University. While at Rutgers, Dr. Leahy started working at the New Jersey Equine Clinic as a stable technician.  Following graduation, she remained at NJEC as a surgical technician and anesthetist for two years. Working at NJEC inspired her to pursue graduate school at the University of Connecticut where she obtained a M.S. degree in Animal Science, followed by veterinary school at Michigan State University College of Veterinary Medicine where she graduated with high honors in 2018. Dr. Leahy returned to NJEC to complete her internship and then remained for an additional year before joining Foundation Equine in 2020.

Some of Dr. Leahy’s professional interests include emergency and critical care, lameness and sports medicine, preventive medicine, ophthalmology, and metabolic diseases. She also has a special interest in the Standardbred industry, especially the rehoming and retraining of Standardbreds following their racing careers. When not working, she enjoys spending time with Helios, Romeo, and her newest horse, an off-the-track Standardbred mare named Alaska. She also enjoys hiking and exploring New Jersey with her fiancé, Nate. 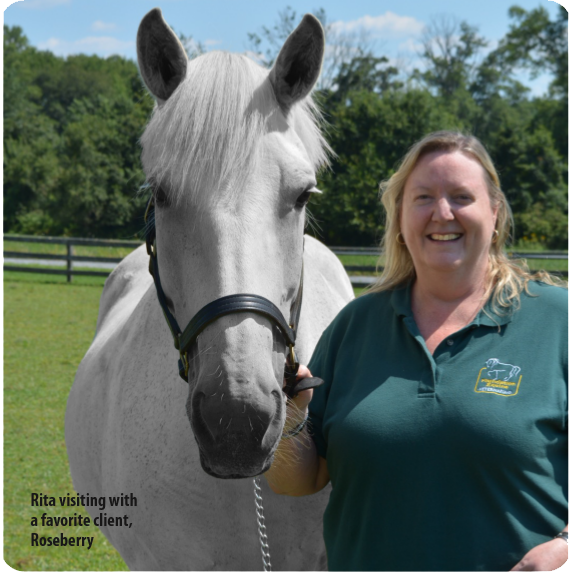 Rita Bliden grew up in Monmouth County and spent her free time as a teenager at nearby horse farms, taking lessons and doing any work that kept her in a barn. She eventually managed several farms, spent two years as an equine veterinary assistant, and served seven years as a Standardbred groom, racing at Freehold, Garden State Park, and the Meadowlands. After fifteen years away from “equine employment,” Rita joined our staff in 2008 as accounts receivable and inventory manager and has been managing our practice since 2015. When not ensuring our office is running smoothly, you can catch Rita teaching her birds, Indie and Peaches, to speak, practicing Yoga, or country line dancing. 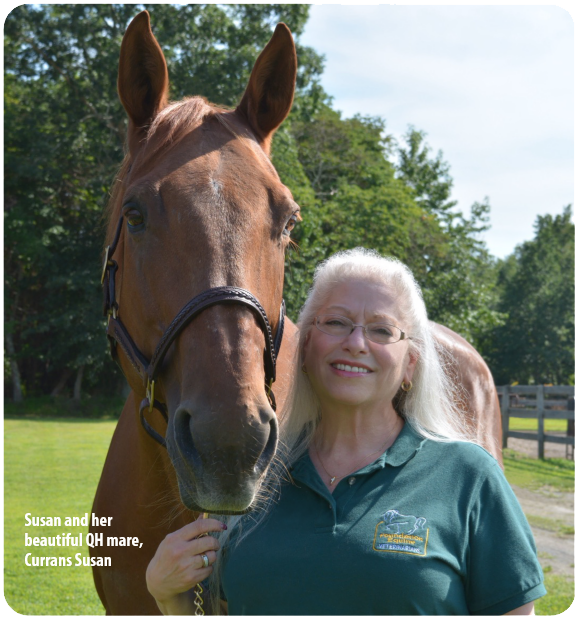 Susan Jessen has been crazy about horses since her grandfather put her on one at 18 months old. In high school she baby sat, and worked in retail to earn the money for the weekly horseback rides with the school riding club.

A retired Paramedic, she is still an active EMT and has provided emergency response coverage for various Monmouth and Ocean County Equestrian events. Susan is also on staff at Raceway Park, the Motorsports facility in Old Bridge, where she serves as an EMS supervisor, for a different kind of horsepower! She and her husband Bob moved to Jackson 23 years ago, and bought their home specifically because it was across the street from a horse farm, where they live there together with their cat “Thomas Jefferson”.

Susan had wanted a horse since she was a very little girl, and at age forty finally got one. She and her mare, also named Susan, have been together for the past twenty years. “I was looking for a made gelding, and wound up with a green mare. Because her name was the same as mine, my trainer said it was meant to be”, and it was. When she is not working Susan can usually be found at the barn enjoying the companionship and relaxation she gets from her horse, and her “horsey” friends.

“The best part about my job at Foundation Equine is getting to talk to other people about horses!” 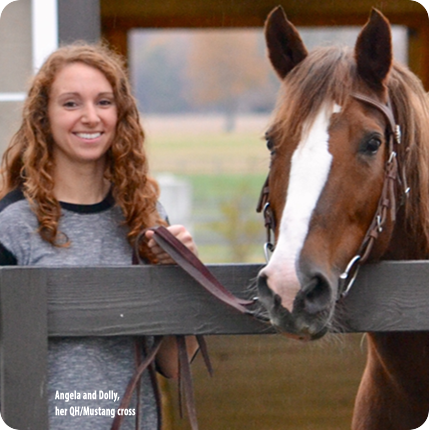 Angela was born and raised in Midland, Michigan. Even as a little girl, her dream was to become a veterinarian. She became very passionate about horses at a young age and joined a 4-H group where she learned how to take care of horses, goats and sheep.

After graduating high school Angela attended a community college local to her hometown. It wasn’t long after that she decided to join the Marines as a means to help fund her education and to continue pursuing her dream. She served five years as an Avionics Technician for helicopters which brought her to the Fort Dix base here in New Jersey. While in the Marines Angela took night classes to help advance her higher education. After completing her time of service in the Marines she gained a year and a half of further experience as a small animal veterinary technician, while simultaneously earning her Bachelor of Science degree in Biology at Rowan University. Angela has not lost sight of her dream to become a veterinarian, but with her husband currently in the Navy the timing isn’t right just yet. She sees this “waiting” period in her life as an opportunity. She thoroughly enjoys being part of the Foundation Equine team and expanding her knowledge about equines.

We look forward to hearing from you

Find us on the map